This is part 6 of my weekly series on Dave Van Domelen’s Academy of Super-Heroes universe, a collection of musings, interviews, writerly insights and historical notes about the free super-hero serials (which started on the newsgroup rec.arts.comics.creative back in ’94 and recently released as Omnibus editions.) 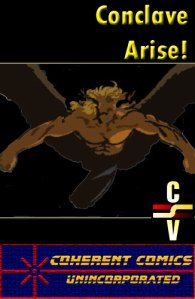 Conclave of Super-Villains marked my entrance into the ASH Universe, introducing the first true super-villain team in the setting. This Omnibus is a prelude to the first crossover event as well, which I’ll discuss next week. But I’ve asked Wil Alambre to write an introduction to this Omnibus. Wil actually wrote an issue of Time Capsules (much after I wrote these) that took some minor characters in the story I was telling, and told their personal stories in their own point of view. I’ve included his story in the Omnibus. Here are Wil’s thoughts on Conclave Arise!

WIL: If there’s one thing that has universally defined heroes, it is the villains they come across. Bad versus good, black versus white, all that meaty jazz that goes into four-color comic-book entertainment. And the best villains, the ones that really stick in our minds, they’re the ones that have some character. Some motivation. Something more to them rather than being the antagonist of the month for the book’s spandex-clad do-gooder. But even the best of the worst usually only get a sliver of the spotlight. Really only teasing us with what’s going on in their malicious minds. Let’s face it, they’re not the stars of the story.

But what if they are? What if it was their book, where they were the main character, where it was their names on the cover in bold fonts? They’re usually much more fascinating individuals, after all. There’s a suspension of disbelief that has to happen for a reader to accept that someone would spend sleepless night after sleepless night defending the innocent and protecting the good for little more than the occasional applause and a splash on the front page. But the blacker aspects of our nature, that’s an easy concept to grasp. Easy and solid and engaging. People want to be the go-getter, the leader, the front-runner, the ambitious. And it’s such a small step to step too far.

But when you want to make them the protagonists of your fiction, they have to be more than bad guys. They’re going to be doing some not-so-nice stuff on a regular basis; if the reader is going to be cheering for them (or at least following along to see how they gets their in the end), then they have to be worth the effort. I think that’s why I’ve always enjoyed a good villain book. Good guys, they can get away with being the ideal. Bad guys, they have to be written better than that to stick. They have to be human.

The Conclave Of Super-Villains series is what really got me into the ASH universe. It’s not uncommon now for a villain book or two to be floated by the big publishers, but back in the day when the CSV posts were coming out, it was still a fresh thing. It’s exactly the sort of concept that makes getting fiction from the RACC newsgroup so worthwhile. And like all good ideas, it took some great starting points and was allowed to grow and evolve. Iloved it then and I still look forward to every issue as it comes out.

You want your Supermans and your Batmans, you can have them. Not me. Bring on the bad guys!