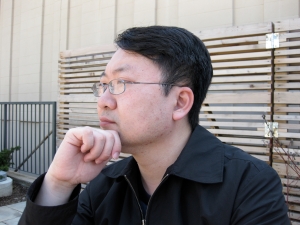 I was born in Taipei, Taiwan, but moved to Canada when I was eight. I enjoy reading, gaming, and writing. It was inevitable that my love of language would intersect with the joys of writing fiction and poetry, specifically in the genres of science fiction, fantasy, and mystery. I am a member of SFWA and the Codex Writers’ Group, as well as the Stop-Watch Gang, a neo-pro speculative fiction critique group in Toronto.

I hold a Ph.D. in Linguistics from McGill University, Montreal, Canada. My areas of expertise are Semantics and Sociolinguistics, which means I pay a lot of attention to the meaning of words and the people who use them. I’m interested in how verbs and prepositions work, and how Canadian English varies from region to region.

I currently work at Innis College in the University of Toronto as an administrator for the graduate Cinema Studies program, the Writing & Rhetoric program, and the Urban Studies program.

The preferred pronunciation of my last name is ‘pie’, like the Greek letter.

I go by the handle @wistling on LiveJournal, Twitter, and e-mail. Why? Because I started off with @lingwist initially, then broke it into two syllables and rearranged them. I love anagrams!