How I Got Up On Stilts

I know a clown.

He’s a professional stiltwalker, and my story in Tesseracts 15 (“The Tremor Road“) happened to feature stiltwalking, so I decided to stage a promotional shot for the September book launch. I called in a favour last August…

So these are the pole stilts I decided against. They looked…dangerous.

The ones with big feet looked more stable. (But looks can be deceiving.) 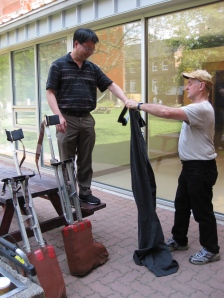 But I would need really long pants to hide the stilts. 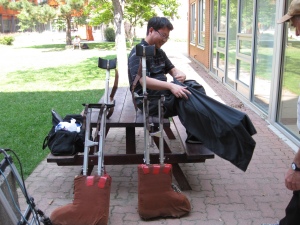 This was the only easy part of the whole experience.

The stilts had to be strapped to my thighs. 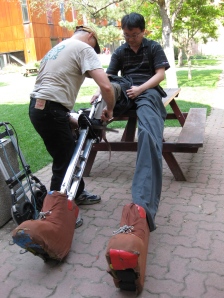 They were heavier than I expected.

It took multiple tries to stand up, and a lot of help you don’t see here. 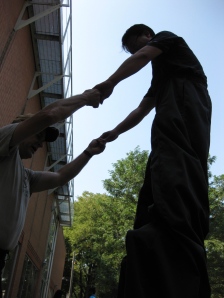 My friend the photographer had to push me from behind. This is me getting used to my new wobbly legs. 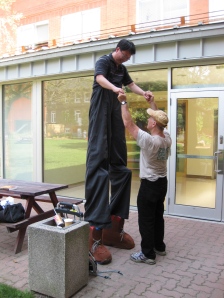 Hell no, I wasn’t about to let go!

Balance isn’t my strong suit. Or coping with heights. 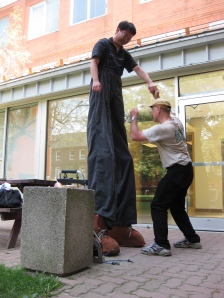 Nor did I have the leg muscles for this. Stilt WALKING was out of the question. I was having quite a lot of difficulty just STANDING. 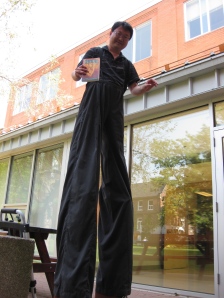 …and letting go. I felt was going to fall any second. Probably backwards. But they didn’t like the background, and thought I should stand in front of the plate glass. 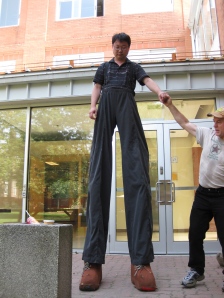 Moving inch by inch, they coaxed me into the right place. That’s me crushing my friend’s hand because I refused to let go! 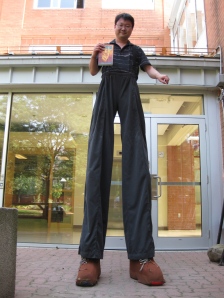 But somehow I found the courage.

I was frozen from fear and my legs were about to give out. But I stood on those stilts long enough to take the promotional shot.

OK, I was ready to get off the stilts. You don’t see any pictures of that, because we needed the photographer to help. The landing was neither easy or graceful, so maybe it’s a good thing there aren’t any pictures of that.
Will I ever get on stilts again?
No. It was an unforgettable experience, but a once-in-a-lifetime thing.