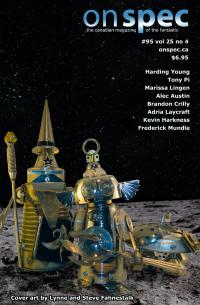 “Though it pained me to see my tools of magic fed to the fire, I would gladly forfeit all worldly possessions to save my beloved.“

A realm where two religions are in competition for supremacy – a situation that rarely works out well. Vod was once the Tsarina’s Lord Conjurer, now accused of necromancy and beheaded by the head of the opposing religion, who displays all the usual signs of villainy. There seems to be something to the necromancy thing, as Vod finds himself reincarnated in the court jester’s marotte – a sort of fool’s scepter. Together, they strive to save the Tsarina from the villain.  — Lois Tilton, Locus Online Reviews

Simple in its execution and effective in its delivery, the story might not reinvent the wheel, but it certainly brought me along for a fun ride. — Charles Payseur, Tangent Online

Tony Pi explores the role of the fool as a social outsider, like most social Others, both invisible (ignored and disregarded) and hypervisible, constantly noticed for his Otherness. — Derek Newman-Stille, Speculating Canada

On a lighter note there’s ‘The Marotte’ by Tony Pi. The Tsarina is deathly ill and Patriarch Damascu blames the Lord Conjuror, Vod, and has his head cut off. This should be a very short story as Vod is our hero and gets decapitated on page two but happily his spirit hangs around to inhabit a cloth puppet used by the court jester. This odd team then try to save the Tsarina. The whole thing was clever, amusing and well-constructed. — Eamonn Murphy, SF Crowsnest